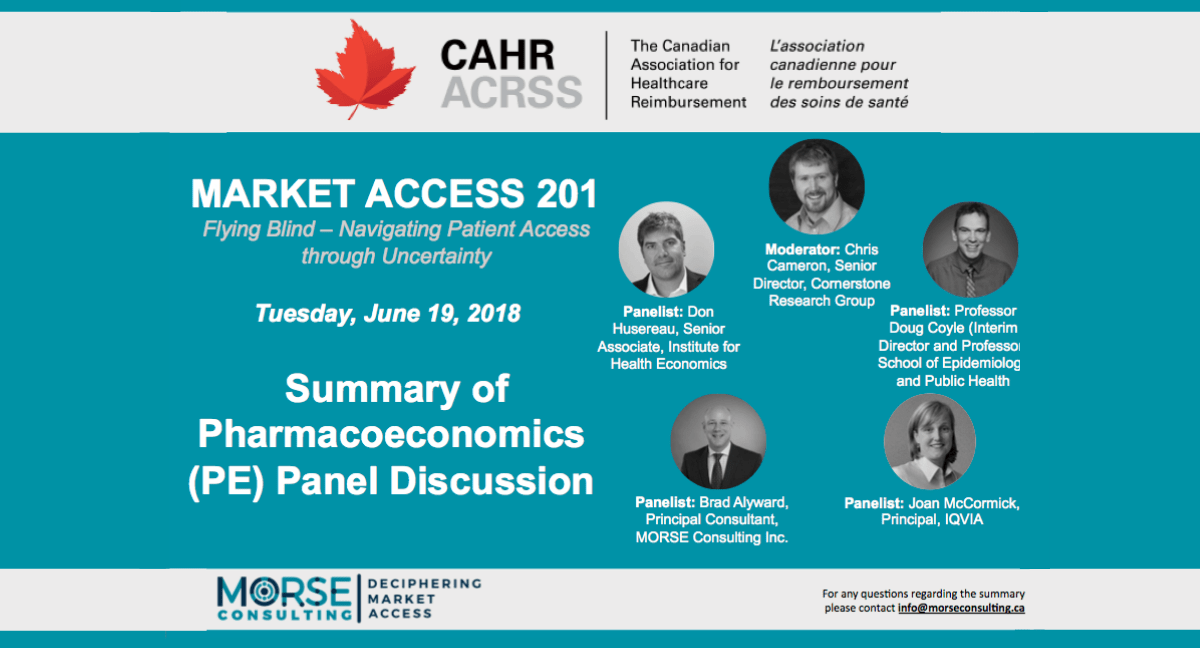 Panel Description: This panel will focus on the growing influence of pharmacoeconomics (PE) in the Canadian reimbursement process. It will discuss the implications of the revised CADTH PE guidelines on CDR and pCODR reviews. The panellists will also discuss the implications of using PE thresholds for price regulations. In addition, the impact of PE models on pCPA negotiations will also be explored.

Chris Cameron – This panel is going to focus on the growing influence of PE in the Canadian environment. It is an integral component of pricing and reimbursement. We have assembled a diverse panel to discuss the revised CADTH economic guidelines and discuss the implications of using thresholds and models in pCPA negotiations. We have asked each panellist to discuss the history of PE and how it has changed recently.

Doug Coyle – I will be talking today about the economic guidelines from CADTH. I was a part of the working group and I’ll touch on those changes and the role of CADTH in looking at the price of a new drug in terms of cost-effectiveness.

Why did we need new guidelines?

The previous guidelines came from 2006. I was part of the team reviewing those guidelines and even then we felt they were out of date. They no longer reflected best practices, nor were they rooted in a coherent theoretical paradigm. Other countries have recommended our new guidelines as representing best practices. These evaluations need to have a root in theory. It became very clear that we needed to adopt a cohesive and theoretical framework for the appropriate guidelines. A social decision-making viewpoint was decided on, with a health care decision maker seeking to maximize a policy objective subject to the available resources within a constrained budget.

How did adopting the paradigm help & significant changes to the guidelines

These changes reflect what decision makers and industry have been doing already. When factors are going to affect our analysis, then stratified analysis is necessary. It allows decision makers to create limited use arrangements and make this evidence-based. This works well for decision makers and industry, making it more operationalized and allows for marketing for a niche population. This is rooted in economic evaluation maximizing health benefits and ensuring access for the populations for which the treatment is the most effective. All analyses need to be probabilistic to reflect uncertainty. Economics is one of the few disciplines that reflects uncertainty. Clinical trials have a lot of uncertainty, but there it is not addressed.

What the Guidelines Do Not Touch On

The guidelines are not focused as much on how economic evaluation can be used in price negotiation nor does it talk about incorporating affordability, risk and cost-effectiveness. CADTH is moving forward with trying to inform pCPA with respect to negotiations. It typically involves a re-analysis by CDR and shows what the ICER may be with different reductions in the price of the drug. These are then used in the CDEC recommendation to come up with the required discount to get to the threshold.

The changes were necessary to inform best practices. Deviations from the guidelines represent either a different theoretical paradigm with respect to social choice and/or an alternative policy objective. Further guidance is required to assist the pCPA and PMPRB interpret the results of analyses.

Don Husereau – I started at pERC in September 2015 and created a “bother list” of a number of issues.

Issues with PE Evaluation at pERC

First thing: poor modelling, there was substantial variation in what was submitted. We took all of our frustrations and wrote a paper regarding modelling in oncology.

The standards of evaluation and presentation were also an issue. As I sat at the table I would get a digest of the analysis from a reviewer, and there was a lot of guesswork without access to the original model and report. It would be better if the standards of evaluation and presentation were consistent. There are changes now in the presentation to the committee, so they are evolving. The guidelines have also helped us create a standard, but how they operationalize the guidelines is program specific.

Finally, sitting on the committee, it is the patient that suffers if the model is poor or the communication is poor. We talk a lot about the patient values, however the perception of opportunity cost was not well perceived by the committee. The notion is, when the ICER is too high we displace opportunities. From the beginning, ICERs were included, but there was a huge range in the degree of inclusion. They utilized ranges to deal with uncertainty, however, the guidelines didn’t address that you have to use probability theory to commit to a single estimate.

So what happened after? What has changed is that now we still don’t talk about ICERs, but we are putting prices in the recommendation now on page 1. So not much has changed. There is further emphasis on price and less emphasis on opportunity cost. There have been small improvements in methods and presentations. It does not speak to the appropriateness of ranges, but it does talk about appropriate survival analysis. Waiting on movement on cost-effectiveness decision rules, handling of uncertainty and other standards. There is no rule, so as health economist, how could I speak to what was or was not cost-effective? It is a mistake to put cost-effectiveness in the framework with no rules which makes it hard to make a judgement call.

Joan McCormick – I am a PMPRB consultant and I am not a health economist. I am here to talk about how PMPRB used this in the past and may use it going forward. Don’s final point about judging what is cost-effective and looking for more guidance is very telling as we look at the PMPRB rules.

Where Are We Headed?

At the PMPRB level there is the addition of three new factors to be considered, which includes pharmacoeconomic value of the new medicine in Canada and that of other medicines in the same therapeutic class, market size and GDP/GDP per capita. We have had a glimpse into how the Board Staff plan on implementing those factors. They want to focus more resources on higher risk and higher priority drugs and plan to limit drug prices of these products to being no higher than a threshold cost per QALY value.

Even if you pass that first test they will re-evaluate, looking at market size and propose to enforce additional price adjustment for those drugs that have a high market size.

The scoping document was not a consulting document, but included a list of questions for stakeholders to reflect upon. Two of the questions asked how should a cost per QALY threshold be established and should the application of a cost per QALY threshold be subject to further adjustment depending on market size? Canada would not be the first jurisdiction to implement a threshold.

GDP was the third factor I mentioned. PMPRB is pointing to the work done by ICER to incorporate GDP into making affordability decisions, some of which has been “Canadianized” by Cornerstone. The WHO introduced the concept of 1 to 3 x GDP as a threshold and they have moved away from this concept.

That’s the regulatory side, but back in 2007 the PMPRB published a budget impact guideline. It was reviewed and accepted and included a BIA Excel template which I don’t think was universally adopted. There is an effort underway at the PMPRB to update these and there is a survey online on what should be included. It is outside the current regulatory scope but as market size and GDP become a part of the system it may become more relevant. To summarize, there is recognition that improvement and new investment into updating existing guidelines both within and outside the regulatory realm will be required.

In general, there are a series of hurdles that payers look at when they are determining which technologies to invest funds in or what is warranted for investment. First and foremost is clinical efficacy – if it does not offer efficacy then it does not get that far down the pathway. Cost-effectiveness is the second hurdle, it does not always need to be cleared but does need to be discussed. From a payer standpoint, you’re looking at more tangible things after this.

Prices tend to be more tangible to a payer. Through collaboration of the pCPA then each payer needs to do their own calculations on whether the drug is affordable in terms of their own budget. Then there are PLA and listing processes to go through. In a lot of cases, cost-effectiveness is one point but does not sway the decision one way or the other. The payers do not critique or redo the PE done by HTA. Whatever comes through that evaluation can essentially be reviewed as fact. They will not debate the outcomes, assumptions and that is why manufacturers are encouraged to talk to HTA. From my experience, PE takes on a greater role where there are no true comparators. PE becomes important for payers in this case because there is nothing else.

Where does PE have a direct impact?

When I was a payer there was a lot of criticism on how the pCPA was only focused on price. There is no denying it is important. If we accept payers are not going to pay list price then PE provides payers the price to where the technology may approach a conventionally accepted threshold. These are starting to make their way into the HTA recommendation and can be used as an anchor. There is a lot of variability. When you are coming into negotiation and you are charged with bridging that gap, it can be used to set a starting point. Sometimes payers won’t budge and other times it is brought into play. It is best used as a guideline in my opinion.

PE analysis can also be used for products with multiple indications. If they have agreed on differential pricing it can help create a relative comparison.

I think manufacturers are well served to recognize the importance of pricing decisions and the impact they can have on negotiations. Recommendations talk about 80 or 90 percent reduction in price. The % discount is not the thing to talk about because its based on list price. Take advantage of the HTA process opportunities to talk about concerns with the analysis. If the general payer is going to use the model they want to see a simplified summary and be able to change assumptions. They would like to use the BIA to satisfy their own analysis. When you are developing your value story you need to touch on all elements of incremental costs and the corresponding result of values to the system. 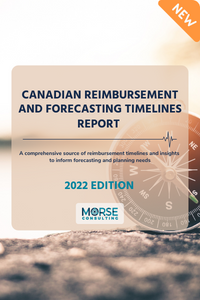